Have you ever paused in the middle of doing something utterly ridiculous and then thought to yourself "Well, shit I'm definitely going to hear about this from the spousal unit." and then immediately continued on with whatever foolish thing you were doing because "Fuck that, I'm a god damn adult and I can do whatever I want." and then a week later as said spousal unit is passing through the kitchen he casually says something like "I can't believe you ate that entire Costco sized box of Oreo's." and you're all like "Um, it was the kid." and he quietly mutters "Yeah, okay." As he walks into another room and you scream at the top of your lungs "Fuck you, I'm an adult, that's what!" and then he comes back and looks at you like you're a lunatic. Then it suddenly dawns on you that you may have over-responded to his "Yeah, okay." which might actually be a greater indicator that there is a serious problem and not the fact that you just ate 90 Oreo cookies in a week and a half, and then the thought enters your mind that you might just have a sugar addiction, not only because you're suddenly over-responding to things, but also your hands are beginning to sweat and you're really wishing you had some fucking Oreo cookies right now? 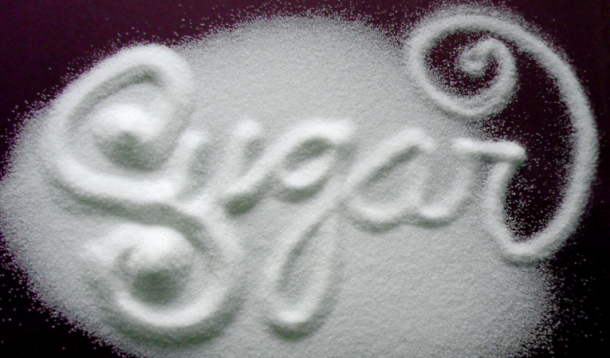 My name is Sandy and I am a sugar-a-holic. I've made excuses for years, namely that it's one of the finer qualities genetically bestowed upon me by my father. All three of my older brothers appear to have the same affinity for the good stuff, and according to all of the stories, so did my dad. I'm not sure that there is science to back this theory up, but lets just say there is because Oreos.

Six months ago, after I gave birth to the human baby, I decided to wean myself off of the junk and lead a healthier lifestyle and while I'm not really sure what the benefits of my giving up sugar are, I bet they are magical and glitter-like. It's not going well, there are probably a dozen other stories much like Oreogate. I'm clearly sick and need help.

I have many reasons for pursuing a healthier, more balanced lifestyle. Namely the kids. Because someone's got to think of the children! I really would rather they not share in my sugar swilling habits. It's a simple miracle that I've never been overweight, my blood sugar is normal, and I didn't get my first cavity until I was in my thirties (and even now it still remains at one). I don't know if my girls will be so lucky with the genetic predisposition and all the miracles. They need a better model than I have been to them. Additionally, I'd really like it if my weight and blood sugar actually stayed where they were and also that that one cavity never gets itself a friend because getting your face drilled into by a complete stranger is about as fun as drinking chlamydia.

So anyway, Monday begins the overhaul. I shall post the product of said overhaul on this here blog, and ye shall see my results. Wish me luck, good friends! Details to come.