Gardening 20 Minutes at a Time

Did I mention that my number two most favorite past time in the world just so happens to be gardening? Number one is NFL football (Never change 'Skins!), and if you continued reading beyond that last sentence then you're my kind of reader and THANK YOU! Welcome! Have a seat and let me tell you about my garden. In August I'll probably start rambling about my football team because my garden has been fried to death by the Southern California sun, so just sit back and relax before shit gets super obnoxious and victimy around here (note: victimy is apparently not a real word, as denoted by the bright red line that appears underneath it every time I type it. However, I must argue that if a Redskins fan who has just lost $1000 worth of perennials to the hot, hot sun is anything, it's obnoxious and victimy. So, spell check your ass, Apple.).

Anyway, the garden! Last year I went a little nuts. I only planted seeds that made food, or better, I only planted all of the seeds that made all of the food. Things got a little out of hand. It likely had something to do with the 40+ tiny tomato seedlings I placed sporadically throughout the back yard in a pacifists bid to avoid seedling thinning (I just can't seem to force myself to do it!). Then I totally got knocked up! It was the strangest thing. One day we were "trying" and literally the next day I was 20 lbs heavier and had my head in a toilet. While that was happening, I completely ignored my garden, expecting the weeds to quite literally eat all of the things I had planted. For a while, it looked like I was correct in my assumption, but then again I was one with her head in a toilet so what the fuck would I know? Huh? Anyway, the rest is a blur to me, but I recall my frazzled looking husband marching into the bedroom one morning while I had my head in a trashcan (I appreciated the change in scenery every once in a while.) and he said something to the effect of "THE GARDEN IS A FUCKING JUNGLE." and then promptly turned to leave, likely to tend to the very neglected children reeking havoc in my very neglected living room.

The moral of this story is that it's OK to let shit go to shit when you're in the throes of pregnancy. The End.

Actually, we were talking about my jungle garden. Aaaaanyway, eventually, said pregnancy turned into a little human being and came out all human looking, but slept just enough for me to be like "Peace out, human baby! I'm going back to tend to my jungle garden." And so I did, and they never saw me again...until the human baby cried and needed to be fed again, which was about every 20 minutes, and kind of still is. So, at this point, with the help of my saintly husband, I have weeded my overgrown jungle into something slightly more palatable to our landlord, and I am actually really excited to see it all come together.

I planted three fuchsia salvia plants this year. I killed one last year. 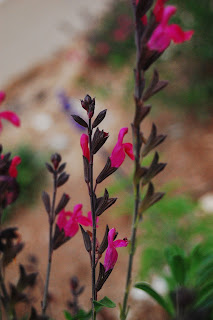 This little front section that I've wanted to dig forever. 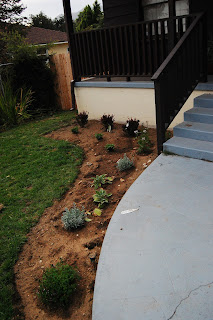 In it, I've planted some Japanese barberry (LOVE that color) 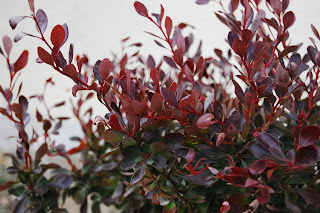 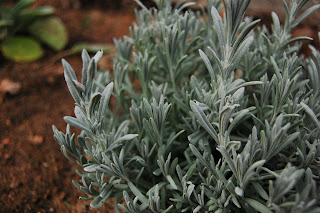 Across the way, my calendula is going bonkers. I kind of dig this plant despite it's old school appeal. Its vintage! 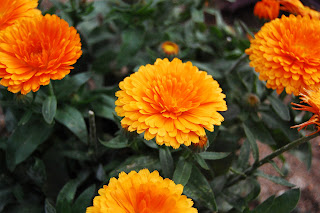 The most obnoxious thing in my yard, besides me, red celosia. We are kindred spirits, that hideously red, fuzzy plant and I. 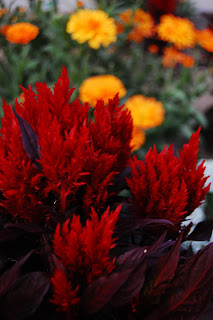 Also, I'm certain that I'm the worlds winner for "Behind the Times" gardener of the year. But look at my big, fluffy, delicate alysum! I have the same kind of love hate relationship with this that I have with my celosia...and myself. It was one of those things that I started from seed just to prove that I could. So now I have, and while I can't say that I ever will again, I can say that it's been real. 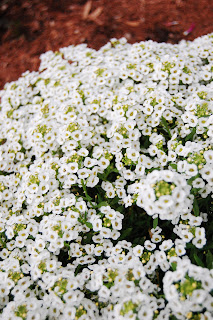 I have more garden to share, I swear. But I also have a life to live 20 minutes at a time and therefore you'll have to wait for the next installment of my garden drama.
Posted by Unknown at 10:22 PM

Email ThisBlogThis!Share to TwitterShare to FacebookShare to Pinterest
Labels: In The Garden